By revealing the double height space above the main spa area, an openness of the space is achieved, promoting the feeling of vertical levitation. Linear lights at the ceiling diffuse along the fabric panels to create the feeling of weightlessness and to attract our eyes vertically, which contributes to the idea of levitation. The overlapping of the ghostly fabric dematerializes and seemingly mystifies the space while the elevated platform further emphasizes this effect, by making occupants ascend to be staged and separated from the rest of the space. In addition, the axial placement of openings creates a visual connection of the three divided rooms and expands the space horizontally, while the similar elements on axis creating an illusion of mirrored images. 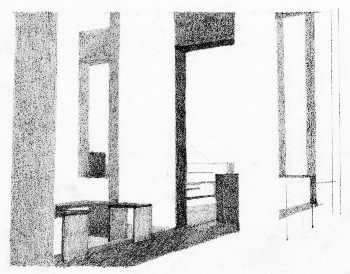 Contact:  Choi+Shine Architects for written permission for image use.